Today, coffee travels the world with ease. It moves from origin to ports all over the world. However, coffee didn’t always move so quickly or so globally. Along with that slower movement, coffee brewing methods moved more slowly and specific methods were more popular in particular areas.

One such method is cevze, or ibrik, which began during the Ottoman Empire in the area that is now Turkey and slowly spread across Eastern Europe, the Middle East, and Northern Africa. The culture of brewing cezve remains strong today in all three regions. However, modern brewing methods, especially those associated with the Third Wave, such as pour over, are encroaching on cezve’s traditional territory. Along with the advance of pour overs and other methods comes a change in coffee culture that both highlights the strength of the existing coffee culture and demonstrates its shortcomings. 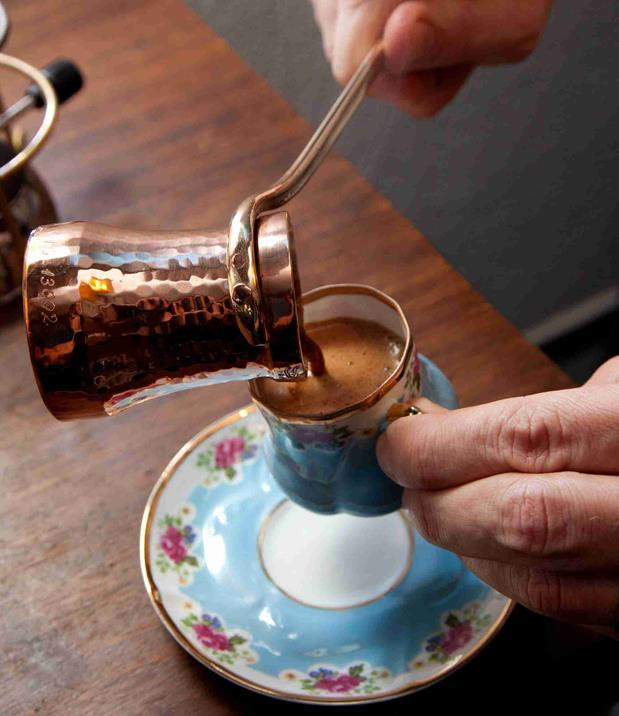 A Tale of Coffees Past…

To understand these changes, we’ll focus on the Middle East where coffee culture is particularly strong.  In ancient times, coffee was typically brewed cold brew-style where it was left to steep in cool water for a number of hours before being heated and drunk. During the time of the Ottoman Empire, the use of a cezve or an ibrik pot became common. A cezve/ibrik pot is typically a small pot that is made from brass, copper, or ceramic with a long handle and spouted mouth designed for pouring the coffee into cups.  Use of the cezve/ibrik pot spread quickly and widely throughout the Middle East Iits most prominent advantage being its quick and delicious preparation. The cezve/ibrik pot method is different from other brewing methods because it uses such finely ground coffee that the particles of the coffee beans are suspended in the liquid, creating a unique and much-desired mouth-feel. In the Middle East, a pot of cezve/ibrik coffee is typically consumed in the afternoon or evening, most often after a meal.

Coffee in the Middle East functions as the foundation upon which many social or professional relationships are built. Getting coffee together is a way to build trust, find common ground, and get to know someone better. While this still holds true for many people and many cafes, such interactions were often the sole province of men. Traditional cafes often solely or mainly served men while younger people and women were left without the same kind of social gathering place.  The growth of modern cafes in the Middle East opens new spaces for women and younger people to study, converse, and build relationships.

With these new spaces, Dubai and the Middle East are reemerging as a global coffee and food center for all kinds of people and businesses. One indicator of Dubai’s preeminence is the Gulfood annual convention that brings people from all over the world to discuss, discover, and learn about new and rising food products. Gulfood is the world’s largest annual food and beverage trade exhibition. This year was its 24th exibition and it boasted more than 100,000 visitors from over 200 countries.

Dubai is also a focal point for coffee in the region. Many global coffee shop chains arrived in Dubai in the 1990s. Dunkin’ Donuts opened its first store there in 1997, Costa Coffee in 1999, and Starbucks in 2000. Some local chains, such as Coffee Planet, established in 2005, have been created in the area and then expanded globally. Also, some smaller independent stores still hold significant sway in the region. There are two main kinds: those inspired by traditional Arabian coffee culture such as cezve/ibrik and those inspired by Third Wave coffee trends.

The growing coffee and food trend in Dubai extends beyond the emergence of new cafes and into the realm of coffee importing. The Dubai Multi Commodities Centre (DMCC) opened in November 2018 and is projected to process up to 20,000 metric tons of green coffee annually. It is the first temperature- controlled warehouse in the Middle East. In a return to the old days of coffee trading, DMCC is making Dubai and the Middle East once again a hub of major coffee activity.

32CUP is excited to be involved in the changing coffee scene in the Middle East by establishing a position at DMCC. From the our warehouse, we’ll be able to quickly and easily serve our roasters throughout the Middle East and beyond with delicious, fresh, and accessible coffees.

Think you’ll benefit from our new Dubai export outpost or know someone who will? Contact us today!